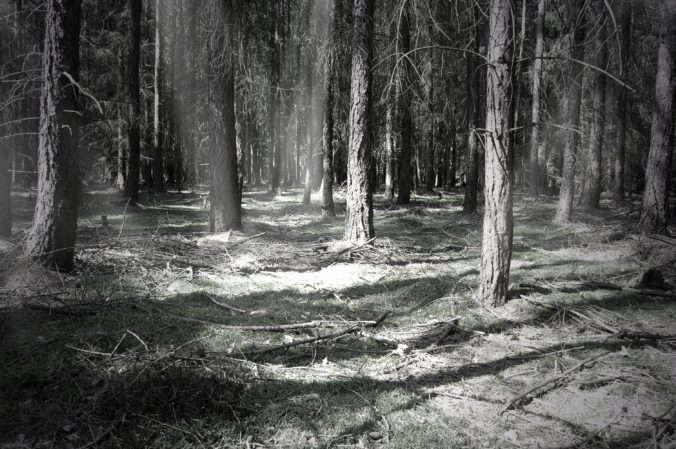 The True Story of the Litch House

Just past North Fork Creek in the sleepy hamlet of Brookville, Pennsylvania, a local legend stands overlooking historic Main Street. The Litch House was built in the 1850s for the lumber baron Thomas Litch and his growing family. Today the residents of Brookville know the stories, but the history of the home is so twisted that few know the true story of the Litch House.

In the years before the Revolution, Western Pennsylvania saw an influx of white settlers into what was nominally recognized as Indian land. The following account of the Brookville area comes from A Survey of the Indian Countries, Being an Account of the Travels of Col. Joseph Paxton Among the Indians of the French Territories:

“At the Head of a Forked Creek there stood a Bluff upon which gloomy Pines held the high ground. My guide led our party away from the wooded Hillock and east toward the Ohio Country. The Indians hereabout hold that these Woods are inhabited by sundry Spirits and ravenous Beasts – Devils, the Parson might deem Them. My Guide related an Incident to me in which an unwary Brave hunting in the Forest was taken up by some Fiend that it was said lurked in the very Trees.”

The following account of the Litch family comes from Recollections of the Allegheny, a first-person history of the 19th century Allegheny Plateau published in 1901:

“In those days the pines still stood thick and gloomy and lured proud men with promises of easy wealth. One of those men, Thomas K. Litch, came up from Pittsburgh and established himself among the leading men of the town. He raised here a family, three fine sons and a daughter, and built for them a great house upon the hill above Old Fork Creek.

“Mr. Litch had purchased an enviable swath of woodland after having heard about the remarkable opportunities in the lumber trade, and he commenced to build the largest and best kind of sawmill yet seen in that part of the country. Soon the woods were abuzz with the sound of the saw-men as the pines were felled and cut to size and sent down the river to Pittsburgh.

“The youngest Litch boy, Edward, was said to be a bad seed and spent his time walking the woods like an Indian and his father was wont to send him to take up a trade in Pittsburgh. Before he could, the boy ran off to take up with a tribe of Iroquois or some such people for a month or more before his father could fetch him.

“When young Edward was seen among the people of Brookville, he seemed a changed man, gaunt and wild-eyed, babbling nonsense and Indian-talk about the spirits of the rocks and the trees. No one paid him mind and he rarely strayed from the empty guest house Mr. Litch had constructed on the estate grounds.”

Unknown to most historians, the Litch family receives a mention in the infamous, always-lost manuscript Mystery of Mountain and Tree, known in occult circles as The Lignis Manes. Ostensibly a history of the culture of Appalachia, The Lignis Manes is best remembered for its extensive recording of mountain black magic practice and its peculiar interest in secret histories and places of supernatural power. The provenance and publication date of The Lignis Manes is unknown but is first mentioned in print in the late 19th century:

“Upon a hill above the serpent’s tongue, Master Litch broke open the trees and gathered the secrets from the creaking logs and he called upon Old Nick, that Evil Spook, to grant his boon and the spot where the Devil’s foot had trod has never known sun’s warmth nor spring’s green nor winter’s touch.”

From an 1895 article in The Lantern’s Light, a monthly publication of the Philadelphia Ghost Club, a short-lived spiritualist society:

“Another legend of the region concerns the so-called Litch House, a manor of extraordinary dimensions built almost fifty years ago, where a number of restless spirits are said to communicate. The manor’s unhappy former master, Thomas Litch, is said to roam the upper chambers and walk through the walls at his whim, while the adjacent guest home is thought to have been visited by Satan himself one cold winter’s night. It is said that Mr. Litch’s son conjured the devil with Indian magicks and thereby lost his soul to burn in the Pit. There is a place near to this house where local legend has it that the Devil tripped on a tree root and fell to his knee, and the spot is now forever barren of vitality and the snow melts as it touches this ground.”

From the suicide note of J. Randolph Bish, resident of the Litch House until his death in 1932, provided by his heirs to this grateful author:

“I hope you will find this story worth the telling, C___. In October of this year, as I was taking my evening walk along the river, I saw an old woman blocking my path. She didn’t seem to notice me, fixed as she was upon the old Litch house. I could see she was dressed oddly, like one of those old mountain grannies we used to see when we were kids. As I approached, I touched my hat and offered some pleasantries. Without taking her gaze from the house, she asked in a rather crude mountain drawl if the old place was occupied. ‘No,’ I told her, as it stood empty just then, ‘but the Moorhead family is moving in next month.’ The old crone spat into her hands and said, ‘Body made of wood, house made of wood, wood made of body,’ and then stalked off mumbling more hoodoo bunk.”

From the confidential papers of Detective Frank Bailey of the Pittsburgh Police Department, dated February 1967:

“Tuesday: Got a call from the chief of Brookville, little place up north. Heard about me from someone Jerry knows. Asked me about black magic. Says they got a haunted house, maybe more than that. I told him maybe some local kids pulling pranks, painting pentagrams and elder signs and whatnot. He says he deals with kid pranks all the time and this ain’t kids. Little girl went missing in the woods in November; walked out of the woods without a scratch in January. Said she’d been in the trees – inside the trees – talking and playing with them the whole time. I sent a message to Iroquois John. Maybe he can tell me what kind of damn trees those are.”

From an interview with Asaph McKitt, 101 year-old self-described mountain man and at one time the longest-living resident of Jefferson County, Pennsylvania. Recorded in 1971 for the local PBS documentary show, Pennsylvania Profiles, the footage was never aired:

Interviewer: “What stories did you hear about the house?”

McKitt: “What my granpappy tol’ me was that Tommy Litch, Master Litch he was called, built himself a house. A fine, big house it was, but it weren’t a house for him and it weren’t for his family.”

Interviewer: “Wh-what, who was it for, then?”

McKitt: “It was for them, them of the trees, you see? In the gloom, in the pines, they walk behind! Old Litch did what none could do, and he walked along with them, with the trees!”

McKitt: “Whatever was in them trees, it still is. Up in the house they walkin’ now.”

From Ed Jessop’s “Out ‘N’ About” column appearing in the March 1978 edition of The Jeffersonian Democrat, Brookville’s weekly newspaper:

“It seems folks have gotten their drawers in a bunch over the doings at a certain prominent local home. The lady of the house was seen running up the street late one morning this past week, screaming and carrying on like she had seen a ghost. Although the poor thing was returned to her home no worse for wear, a little bird tells me that she did in fact see a real live ghost in her storied abode. Check with local agents if you’re looking to move, as this columnist has it on good authority that a grand home known for its beautiful woodwork will soon be on the market!”

Under the bridge that crosses Brookville’s North Fork Creek, this graffiti was found and recorded by a concerned citizen in 1982:

From the records of Harvey J. Rearick, president and founder of the Jefferson County Extra-Historical Society, the now-defunct folklore project:

“My research is nearly complete; one more foray into the Litch house before I close this case. It is my opinion that not only is the house haunted, but a large part of the surrounding woods is as well. There are things in those woods that I can’t explain, things I have seen but wish I hadn’t. It’s connected to the trees somehow, as if the trees are haunted by something, but what? Is it some nature spirit like the Indians used to call on, or can the trees be haunted by ghosts of people? What people, though, I don’t know.

“Here’s what I’ve pieced together so far: Thomas Litch found something in the woods long before he bought the property. I think his son, Edward, figured it out later, got scared, and never went back to the house. I think Edward even tried to stop whatever it was in the house and the supposed magic circle that shows up in all the stories is really the only spot that Edward was able to cleanse with the spells he had learned from the Indians. One little spot where nothing grows (not even the trees) was the only protection against whatever was haunting (is still haunting!) the Litch House.

“What I need to do is get in that house and confirm that it’s made from the same wood. And if I can, I’ll see if I can capture any evidence that Thomas Litch’s ghost is in there somewhere, too.”

Harvey, a dear friend, disappeared in 1999 the very night he wrote the note above. What was left of his papers were entrusted to me and from them I have culled everything I present here. This is a case for a history of a haunting, not grainy videos or blurry photographs, but an authentic archive of the supernatural, what Harvey would have called the true story of the Litch House.