The following account was sent to me three months ago by a young man known to me only as Ramon. His story is fantastic and horrific; I, however, cannot testify as to its veracity. Despite my attempts to reach him, I have not had contact with Ramon since his first email. I reprint it here in full.

“I do a lot of freelance work for a weekly in San Francisco. As you may have heard, one of the big stories right now is the shuttle buses that take tech workers from SF to Silicon Valley for companies like Facebook and Google. Residents complain about the buses blocking traffic and idling in city bus stops. It’s really a story about gentrification and income inequality, and everybody loves to dump on the techies, too.

This stuff has been covered to death in San Francisco, so I wanted to find a different angle. I thought if I talked to some of the shuttle drivers, I could sell an editor on a story about a difference in culture and income between the riders and the drivers.

It sounded a lot easier than it was. When I approached the shuttle companies, they wouldn’t even talk to me. At first I thought they were trying to avoid publicity, but now I know the real reason.

It wasn’t hard to get on the trail of these buses; Interstate 280 is full of them. My plan was to follow the last of the buses up from the valley to San Francisco, catch the drivers after they make their drop offs in the city.

So, one early summer evening I sat in my car on Page Mill Road just off of 280 and, around 7PM, I pulled into the evening traffic behind a large white bus. You can always pick out the tech buses because, unlike those gaudy tourist buses, the tech buses are plain white and black with no markings at all.

We pulled onto 280 and started the crawl north to San Francisco. The sun was just going down and, with the light behind the bus, I could almost make out the silhouettes of the passengers inside, their heads bowed in concentration of their numinous screens.

It wasn’t long before the traffic began to thin and soon, it was just me in my little Camry and the sleek white bus prowling the lanes like a killer whale. As we got about halfway to the city, the bus moved to the exit lane and I thought for a moment it was going to pull over.

It was just before the junction for 92. This stretch of road is pretty barren, but I knew there was a rest stop coming up somewhere. If the bus was stopping there, it would be a great chance to talk to the driver. Suddenly, the bus was exiting the freeway and I was following close behind.

Then I did something and I’m still not sure why I did it.  I turned off my headlights. I know it was pretty dangerous, but I just had this feeling that something was about to happen. I kept my distance behind the bus.

The exit road curved up and away. It didn’t look like a rest stop at all. The bus climbed up and up and I never saw the usual parking lot or buildings for restrooms or even any other cars.

I had never seen this exit before. My best guess at the time was it was one of the scenic vista exits that they have around there; a place to stop and check out the view of the bay. But what would a commuter bus be doing there?  We drove for a few more minutes on the unlit road. The bus never slowed down.

I wasn’t sure I could keep following the bus because there weren’t any lights on the road. The only light I had to go by was what came off the bus itself. The bus turned a corner, however, and it suddenly seemed that the night turned to day.

I pulled off the road and slammed on the brakes. In front of me was a parking lot, a huge parking lot lit up with banks and banks of stadium lights, surrounded by a high chain link fence. The entire lot was filled with buses identical to the bus I had just followed. I watched as that bus pulled into the lot through the open gate.

It drove through without stopping, disappearing behind rows of similar buses. I didn’t see a guard or intercom or anything at the gate. I knew this was my best chance to get up close to these buses and talk to their drivers.

I marched straight through the gate and stopped. The lot was like a still picture, it was lit up, alive, but nothing moved, nothing made a sound. I couldn’t even hear the bus I had followed in; it had joined its brethren and become a part of the picture.

I followed the path that the bus had taken as best I could. The other buses had arranged themselves in rows at odd angles, making it difficult to make out where the other bus had gone. The whole place was deserted and quiet except for the sound of my sneakers against the gleaming black asphalt.

I knew I might never find my bus, but I wondered what could have happened to the passengers and the driver. Was there something else here in the parking lot as well? If I couldn’t get an interview, I would settle for some pictures of the inside of a bus. My editor would buy that.

I approached the nearest bus in a state of agitated caution. Not being versed in the laws regarding unattended vehicles in California, I didn’t know if I was breaking a law or not. I reached for the door with trepidation, but before I touched the cold steel of the handle, the door sprung open of its own dreadful volition.

The driver’s seat was empty. I called out a timid greeting, but the darkness beyond the yawning cavity did not respond. Curious, I placed a tentative step on the black plastic step and raised myself up to peer beyond the towering passenger seats.

The seats were unoccupied and darkness seemed to rule the empty bus. I paused in frustration, not knowing if photographs of an empty bus were enough to excite my editor. Then, in the darkness, I heard what I thought was a whisper drifting over the brightly-colored fabric of the sepulchral bus seats. 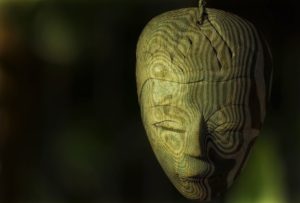 It seemed to come from somewhere far away, yet it could only have originated from inside the cavernous bus, if not in front of me, then on the unseen second floor. I took another cautious step into the darkling aisle and approached the staircase that wound above.

The sibilant whispering grew louder and I thought I could discern within it the peculiar rhythms of a ritual chant, like something I had heard the swarthy Palo Altans call to their idol-capped screens. I turned away from the steps as I perceived at their summit the coalescing of a strange form loathsomely redolent of spheres and dimensions apart from our own.

I ran from the bus in a rush of delirium, my thoughts a jumble of nameless plasticity. I staggered in my madness among the bone-white buses until I could locate the lonely gate from whence I made my escape from the parking lot.

In my feverish agitation, I fled past the spot where I had left my car and up until I summited the hillside. I found myself overlooking the hellish lot and its fleet of monstrous implications. I could see now for the first time that the buses were arranged in a very curious pattern not unlike the frightful elder signs that the crazed Menlo Park idolaters use in their blasphemous rites. The revelation of the profane symbol sent my thoughts careening on the edge of non-Euclidean angles.

And in my reverie, I felt as if I was carried far from this benighted shore to a strange, nethermost space so distant, so forsaken, it was hard to say whether it had ever really existed. And there beyond the vagaries of time and space, in a chamber unlit, there was something that moved, something boundless in its cruel hunger, something that saw me and knew me! It whispered its blasphemy to me, in maddening murmurs, it muttered its madness! It was the center of infinity, the boundless place where all things, known and unknown – the information – were collected and entombed; the place where one could seek and uncover all the secret knowledge of the universe. All one had to do was search! And it seemed that this place was reaching out and touching our plane of existence, collecting all that was known, draining dry our very thoughts and adding them unceremoniously to the black spirals of infinity that swarmed in the occult gulfs outside of time.

I awoke in the driver’s seat of my Camry. My clothes were disheveled and I smelled terrible. The sun was rising. No fleet of hellbound busses met its light. No perverse parking lot stretched to the reaches of furthest space. I was alone on a hill overlooking a highway.

I present my account to you in the hope that someone, somewhere will be able to make sense of it, or at least, find some small grain of comfort in the confirmation that the struggles of this world are transitory, that something strange and terrible is waiting for us in the dark. Remember: what was driven may be parked, and what was idle may drive again.” 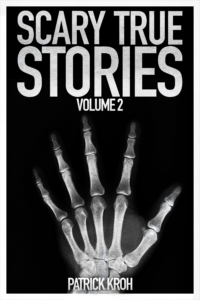 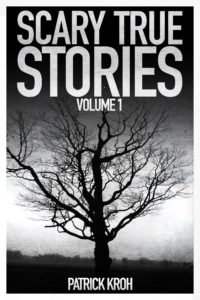